The Volkswagen CC first made its debut back in 2008, and it was able to wow the public. This was due to how it was one of the first mainstream cars to be referred to as a “four-door coupe” with its low, coupe-like roofline. With this car you are getting the best of both worlds – practicality with a touch of a sporty vibe. The CC features a 2.0-liter turbo-four with 200 hp and 207 lb-ft of torque. The selling feature of this car is that it has the driving dynamics of an Audi, with a highly affordable price. Sounds too good to be true, right? Wrong, this could all be yours for roughly $34,000. How can you resist?

The original CC was available with either a 2.0-liter turbocharged I-4 or a narrow angle 3.6-liter V-6. Then in 2010 it offered a 200-hp 2.0-liter and a six-speed manual hit 60 mph. However, 2012 led for some big changes for the CC, starting off with a name change from “Passat CC” to simply “CC.” A sleeker name, along with a sleeker engine: 2.0-liter turbo-four and six-speed dual-clutch transmission was quicker. Then, the year of 2015 led for some impressive advances in the drive dynamic, with a Volkswagen CC 3.6 4Motion with the 280-hp 3.6-liter V-6, six-speed dual-clutch transmission, and all-wheel drive was marginally quicker to 60 mph than other models with 200-hp 2.0-liter turbocharged engine.

The CC offers a similar exterior to that of the Passat, however it has a sleeker look with a lower roof in order to allude that extra “cool factor.” The car only comes in sedan form, and offers a comfortable ride like no other with an interior that is easy to use. Even though the CC has sports car vibes, safety still comes first. It rated good for majority of safety tests, and has safety features that sets it apart from the rest. These include forward collision warning, lane departure warning, autonomous emergency braking, and adaptive cruise control. The CC will be impressing car fanatics for years to come with its well-functioning base with a sports car mentality. 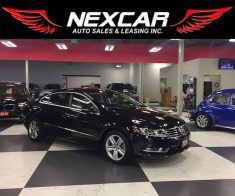